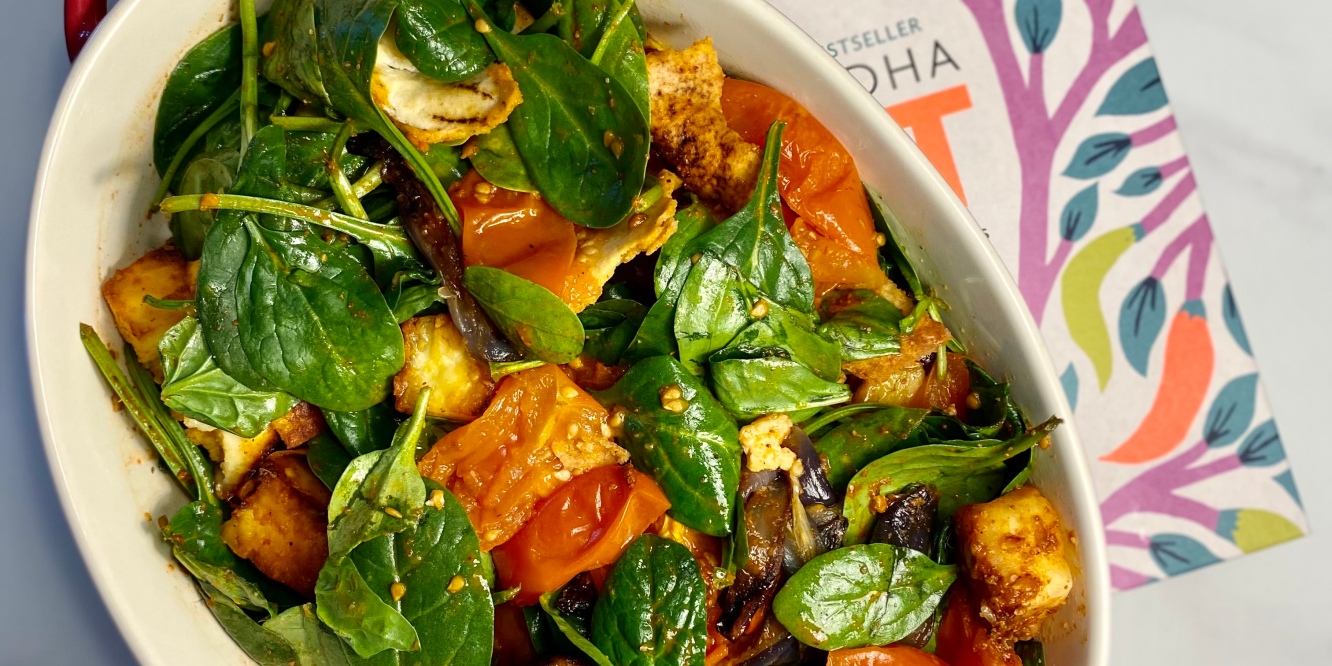 Lately, I have been taking inspiration of Asian food from this cookbook titled East by Meera Sodha. This recipe as described in the book is a deconstructed version of saag paneer. I am usually not a fan of salad as I find them quite raw and bland. But this recipe had all ingredients cooked (apart from the spinach) and sounded so full of flavour that I had to try it. You cannot go wrong with a combination of spinach, paneer and tomatoes! Plus the addition of a very Indianised dressing really transforms this salad!

5. While the trays are in the oven, make the dressing by mixing the cumin powder, Kashmiri red chilli powder, garam masala, fresh lemon juice, salt and ½ tbsp olive oil and water.

6. After 25 minutes, remove the onion tin from the oven and toss the bread (naan, roti, pita, or plain bread – whatever you have at hand) to coat it with the liquid in the tray.

7. Place the tray back in the oven and cook both the trays for a further 5 minutes or until the bread is crisp and brown at the edges, onion is soft and tomatoes have charred with black spots.

8. Remove both the trays from the oven and take out the garlic cloves from the onion tray.

9. Optional – Once cooled, crush the cooked garlic and toss it with the dressing.

10. In a serving tray, mix the tomatoes, onions, paneer and crisp bread leaving some of the tomato juices behind.

11. Add the spinach, dressing, some of the remaining tomato juice and mix well so that everything is coated.

12. Adjust the seasoning if needed and enjoy!

Hope you enjoy this!

View all posts by kpfoodheaven